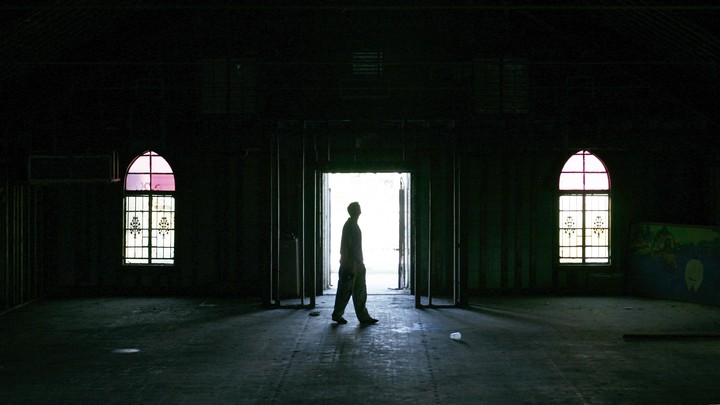 Religious communities often face a choice: Sell off the buildings they can no longer afford, or find a way to fill them with new uses.

Three blocks from my Brooklyn apartment, a large brick structure stretches toward heaven. Tourists recognize it as a church—the building’s bell tower and stained-glass windows give it away—but worshippers haven’t gathered here in years.

The 19th-century building was once known as St. Vincent De Paul Church and housed a vibrant congregation for more than a century. But attendance dwindled and coffers ran dry by the early 2000s. Rain leaked through holes left by missing shingles, a tree sprouted in the bell tower, and the Brooklyn diocese decided to sell the building to developers. Today, the Spire Lofts boasts 40 luxury apartments, with one-bedroom units renting for as much as $4,812 per month. It takes serious cash to make God’s house your own, apparently.

Many of our nation’s churches can no longer afford to maintain their structures—6,000 to 10,000 churches die each year in America—and that number will likely grow. Though more than 70 percent of our citizens still claim to be Christian, congregational participation is less central to many Americans’ faith than it once was. Most denominations are declining as a share of the overall population, and donations to congregations have been falling for decades. Meanwhile, religiously unaffiliated Americans, nicknamed the “nones,” are growing as a share of the U.S. population.

Any minister can tell you that the two best predictors of a congregation’s survival are “budgets and butts,” and American churches are struggling by both metrics. As donations and attendance decrease, the cost of maintaining large physical structures that are in use only a few hours a week by a handful of worshippers becomes prohibitive. None of these trends shows signs of slowing, so the United States’ struggling congregations face a choice: Start packing or find a creative way to stay afloat.

Closure and adaptive reuse often seems like the simplest and most responsible path. Many houses of worship sit on prime real estate, often in the center of towns or cities, where inventory is low. Selling the property to the highest bidder is a quick and effective way to cut losses and settle debts. But repurposing a sacred space for secular use has a number of drawbacks. There are zoning issues, price negotiations, and sometimes fierce pushback from the surrounding community and the parish’s former members.

A church building is more than just walls and windows; it is also a sacred vessel that stores generations of religious memories. Even for those who do not regularly practice a religion, sacred images and structures operate as powerful community symbols. When a hallowed building is resurrected as something else, those who feel a connection to that symbol may experience a sense of loss or even righteous anger.

After St. Augustine’s Church in South Boston was abandoned, the developer, Bruce Daniel, encountered a number of unforeseen difficulties. Demolishing the 140-year-old building and starting from scratch was the most economical option, but sentimental neighbors’ protests forced Daniel to retrofit the existing building into condos. Many local residents remain unsatisfied with the compromise.

“Anybody who goes into a neighborhood and buys a church, without having some knowledge and sensitivity, they’re asking for trouble,” Daniel told The Boston Globe.

While this type of sacred-to-secular conversion may be a tough pill for former members to swallow, many are even less satisfied with the alternatives. A large number of abandoned churches have become wineries or breweries or bars. Others have been converted into hotels, bed-and-breakfasts, and Airbnbs. A few have been transformed into entertainment venues, such as an indoor playground for children, a laser-tag arena, or a skate park.

When St. Francis de Sales Church in Troy, New York, closed in 2009, it was converted into a fraternity house for the Phi Sigma Kappa chapter at Rensselaer Polytechnic Institute. A communal symbol that once served as a beacon of hope and welcome now seems like little more than an emblem of American youthful superficiality. Imagine the emotional impact of driving past the place of your mother’s baptism only to see frat boys stumbling down the front steps.

Calling it quits isn’t the only option for dwindling congregations in possession of expansive, expensive buildings. Some are moving upstream of the crisis, opting to repurpose their buildings before they go under.

Larry Duggins left a successful career in investment banking a decade ago to attend seminary at Southern Methodist University. There he met a professor of evangelism named Elaine Heath with whom he brainstormed ways to help dying churches who maintain a will to live. The pair eventually founded the Missional Wisdom Foundation, a 501c(3) that functions as a kind of think tank for “alternative forms of Christian community that makes sense for traditional churches that may be declining.”

“Years ago, the neighborhood church was the place many in America got together and, along with local schools, was where they got to know their neighbors,” Duggins told me. “But this model is no longer relevant for many people, so churches have to think creatively about how to help people encounter others and God in their everyday lives.”

To test their idea, Duggins and Heath approached the pastor of White Rock United Methodist Church in Dallas about collaborating. Half a century ago, it was a massive congregation with robust weekly programming, a strong reputation in the community, and a 60,000-square-foot building. But the neighborhood’s demographics shifted in recent years, and church membership waned. Its combination of sprawling space and shrinking attendance made White Rock the perfect guinea pig for Duggins and Heath’s experiments.

Missional Wisdom moved into the bottom 15,000 square feet of White Rock’s building and got to work. It converted the fellowship hall into a co-working space and transformed Sunday school rooms into a workshop for local artisans, including a florist and a stained-glass-window artist. It formed an economic empowerment center, where the group teaches a local population of African refugees language and business skills. And it finished out the space with a yoga studio and a community dance studio. Today, the church building is bustling most days, and the congregation is both covering expenses and generating revenue from its profit-sharing agreement with Missional Wisdom.

Next, the Missional Wisdom team partnered with Bethesda United Methodist Church in Asheville, North Carolina—a congregation with challenges similar to White Rock’s. Together, they created a community center called Haw Creek Commons. In addition to co-working space, they retrofitted the building with a textile and woodworking shop, meeting rooms that are used by local business and AA groups, a retreat space that can sleep up to nine, and a commercial kitchen in the basement for local bakers and chefs. Outside, Missional Wisdom constructed a community garden, food forest, beehives for the Haw Creek Bee Club, a greenhouse, and a playground for the children who attend the school next door.

Duggins said that the goal of these two experiments was simply to create opportunities and space for the community to gather and connect with one another. But as with White Rock, Haw Creek Commons has had residual positive effects on its host congregation.

“We wanted to transform the church into a place that would draw people who might not otherwise come, and in Asheville, we’ve seen it break down stereotypes of what the church is,” Duggins said. “At Bethesda, there were less than 10 people in the church on a given Sunday, but now there are more than 50.” Multipurpose spaces lower the barriers to entry. When someone using a co-working space experiences a personal crisis, they have a comfortable place to turn to.

This relatively small organization can only do so much to turn the tide of congregational death in America. Missional Wisdom has shifted its focus from one-off projects to publishing books, conducting seminars, and consulting with struggling churches. They hope that these resources will be helpful to America’s flailing congregations who are forced to choose between evacuation and innovation. The latter may be the harder road to travel, but many faithful will find it preferable to watching their childhood church converted into luxury lofts.